I was interested in biking from a very early age.  At 8yrs I was into Scrambling, by 10yrs I had switched to Road Racing and cycled (pedal power) to both Crystal Palace and Brands Hatch from my Hayes, Kent home for the majority of meetings.  I had always been a Gilera fanatic although I was only 11 when they pulled their factory team out of competitions, so I never got to see the dustbin faired 4 cylinder in action. 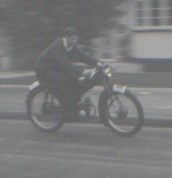 My first bike (at the age of 14) was a Dunkley, 70cc 4-stroke 2-speed hand change which of course, I NEVER road on the public highway.  I spent many a day riding around the rather large car park of the Bromley FC ground (with their written permission).

Next came BSA, Vespa (yes I know it was a scooter), and Triumph bikes, which I rode to watch the racing (not the Vespa though).  I really wanted a 150 or 175 Gilera but there was just no way I could afford one as even second hand (if you could find one) they were way over my limit.

For a year or so, I road a brand new Itom 50cc bike.  I say brand new, it was actually about 4 years old, had never been used and was the last bike the showroom had as they had stopped selling bikes.  Needless to say I got that at a fraction of the cost it should have been.  I remember the first time I ‘screamed’ it to Brands to watch a meeting.  It was a fascinating sight to a lot of the Gold Star and Triton riders who crowded around and were amazed that it got all the way from Bromley without blowing up.  I can honestly say that I loved riding the Itom around even though it wasn’t a Gilera.

By the age of 19, I had ‘tasted the tarmac’ so often and losing quite a few of my mates to bike road accidents that, after a particularly bad crash I was fortunate to walk away from, I decided to ‘take the hint’ and I gave up riding.  I was soon off to live in Australia and although I kept my interest in watching the bikes racing, I had no desire to ever ride one again.  Come 1997 and for various reasons I had to return to England and was soon contacted by an ex schoolmate and riding pal and after 40 years we got together for a chat about the old days.  He was still a biker and asked if I was and when I said no he asked if I was still ‘into’ Gileras.  I said I was, and one thing led to another and I called into see Bob Wright in Weston super Mare to see if there was a Gilera Club that I could join.  He said that The Gilera Network had finished.  Whilst talking to Bob I just happened to notice a lovely small red sports bike sitting in his showroom.  He said it wasn’t for sale and he in fact he only did spares now.

After several more trips to talk Gilera with Bob, I had decided to start a Gilera Owners Club up and was running the idea past him to see what he thought.  He suggested I did start the Club and then surprised me by asking if I was still interested in the small red sports bike.  I said I may be and he told me that it was for sale but only to a Gilera enthusiast which I obviously was.  I did buy that 1989 350cc Nuovo Saturno and truly loved the bike. I then formed the I Gotta Gilera Owners Club of Britain.  We did attend several Shows and had a few trips.out, but the interest of members seemed to be more into just receiving the monthly newsletter than attending Club functions. The Saturno handled like a train on tracks, and even if the riding position was a bit much for a 60 year old, I still loved it.  I loved my Saturno so much that I had bought a second one (1990 black).  Even rode it from Weston super Mare to Cadwell Park for a Morini Track Day (during which I’m sure I got the record for the slowest ever lap) and then rode it back to Weston.  After 4 years, the Club sadly came to an end. I still had my Saturnos but fife never goes to plan, and in 2010 I had to say goodbye to both the Saturnos and was left with just a Honda CB500 as a run-around.  This however was stolen at the end of 2010 and currently I’m back to being a car driver again.  Hopefully, in the not too distant future, I’ll be back on a Gilera again but it might only be a 125 or 180 DNA that I can afford.  At least it would be a Gilera and that’s what really counts.

Why, When and How I became a TT Marshall